Intrapreneur: The new career path for the 2020s 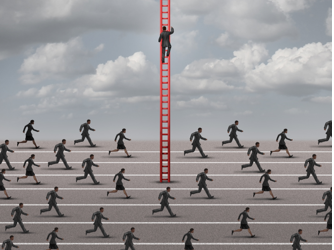 Over the next decade, the world of work will be radically transformed. We’ve all heard the statistics about job losses due to automation over the next decade. It is predicted that by 2030 between 30% and 40% of current jobs will be lost to technology in various forms. Even white-collar jobs that were once considered ‘unautomatable’, such as lawyering, stockbroking, radiology and doctoring, are now able to be done by AI – and in most cases with much greater levels of efficiency and accuracy.

How can people future-proof their careers in this new world of work? The answer is to gain a reputation as an INTRAPRENEUR.

Intrapreneurs are that special breed of employee who think and act like entrepreneurs but while still working inside an organisation or business. These are the people who use their curiosity, creativity, initiative and passion to solve problems which advance the organisation’s goals and impact, evolve business models, serve customers, bring in new technology, find new revenue streams and generally create value. The Financial Times describes intrapreneurs as “the next big trend” and a “vital component” of successful workplaces of the future.

Writer George Crane famously said, ‘There is no future in any job. The future lies in the person who holds the job.’ Employees who take a passive approach to their professional development and rely entirely on their workplace to provide for their ongoing learning could find themselves losing ground to more proactive, lifelong learners who actively and independently seek out opportunities to extend themselves – both within their workplaces and beyond.

Today we live in a disrupted and innovation hungry world.

Most employers feel the pressure to innovate. They are aware that the future belongs to those businesses and organisations who can successfully adapt, stay relevant and be future-ready. They want employees who are going to be able to help them with that mission and actively (and pro-actively) contribute to the organisation’s evolution and success. Workers who can do that will be rewarded with unprecedented opportunities.

Many large companies these days are calling on their employees to be intrapreneurial. They are even explicitly writing it into their vision and value statements. For example, IBM says “We ask our employees to behave in an INTRAPRENEURIAL, non-bureaucratic and productive manner”; Union Bank of Switzerland declares, “We think, decide and behave in an INTRAPRENEURIAL way”; Daimler Chrysler articulates it thus, “We want a management philosophy which is based on INTRAPRENEURIAL thought and behaviour.” These examples from well-known global companies reflect the new call to intrapreneurialism within progressive organisations.

I am an active user of LinkedIn and I’ve noticed an interesting trend where people are increasingly describing themselves as intrapreneurs (or related terms such as – entreprenurse). The term is starting to appear in job titles such as Vice President for Intrapreneurial Culture. You can listen to my interview with Louise Kyhl Triolo, VP of Intrapreneurial Culture at Airbus (a global aerospace corporation with a 135,000 strong workforce) here. Have a look at Intrapreneur Magazine for lots of stories of people who are developing their careers, skills and opportunities through intrapreneurialism.

These are all SIGNALS from the EMERGING FUTURE.

Bottom line – in a world where careers are evolving in very non-traditional, fluid ways, being an intrapreneur will enhance your career opportunities, long-term earning potential and professional satisfaction.

Give yourself a day to learn about this emerging trend. Join us at the Australian Intrapreneurs Summit on the 19th of March at the Brisbane Convention Centre. It will be a day of transformative learning, wonderful networking, active participation and also a lot of fun. Early bird ends on 7th of Feb. Don’t miss out.